What You Need To Know Now About AI

The daily unfolding of artificial intelligence elicits everything from slight unease to substantial terror for many in society today. Yet in the midst of uproar and angst, China tech company, Tencent has decided to draw a firm line in the sand and took the opportunity while at the recent Cannes Lions Festival to outline a strategic approach that just may be a huge game-changer in corporate standards around AI practices now and in the future.

Delivered onstage by Seng Yee Lau (known as S.Y.), Tencent's Senior Executive Vice President and Chairman, Tencent offered a bold strategy around Tech for Good that, if the company can fully execute, will continue to make it one-t0-watch as a massive global player in the technology space.

While the company may have missed its most recent earnings target when it reported figures last month, Tencent still reported adjusted earnings of 32 cents per share on revenue of a whopping $12.69 billion, up 16 percent from a year ago. But it hardly seems content to rest on such laurels and this latest AI move is indicative of such work.

To be clear, Tencent is one of China’s largest holding companies. Difficult to describe to the American mind, if Tencent were a movie pitch, it’d be like, “Imagine Google meets Disney, Netflix, Facebook, PayPal and Universal Music Group, plus gaming rolled into one." But this is real life and more importantly, this is real reach. Its subsidiaries provide media, entertainment, payment systems, smartphones, internet mobile phone value-added services and operate online advertising services in China. However, it is probably best known in the U.S. market as the company behind WeChat. Indeed,  Boston Consulting Group has named Tencent as one of the world’s most innovative companies.

Now it is attempting to prove that it can continue to still hold that title in terms of its approach to AI.

Tencent is a company that has seemingly never looked backward and is now looking firmly ahead at AI. To be sure, there were a number of discussions around AI during Cannes Lions Festival but not quite like Lau's.  Talk was more around AI for more proficient targeting of advertisement.  Tencent is talking about changing lives, overall, via AI.

Lau, who has been part of the Tencent top management steering committee since 2006, where he served 11 years as the President of Tencent Online Media Group and built the operation into one of the largest multi-platform media conglomerate in China,  champions the cause of technology for universal good and spoke specifically while in Cannes, France about how technology could drive sustainable development of human society

"AI’s implementation is a reality that must be confronted now," he exclaimed.  He added, "It is a corporate social responsibility, and like all tech companies, Tencent’s responsibilities in the digital age are imperative."

His deep fervor yet steady vision for the space is easily palpable during our conversation after his presentation. Lau told me, "Tencent has always adhered to the concept of 'creating value for users' and is committed to promoting technology for good and continuously improving the quality of human life. What we hope to do is work with everyone to build a new ecosystem of Technology for Good, creating an imaginative and promising future for human being."

The company's vision for the space comes only two months ago when senior leaders at Tencent had extensive, internal discussion about the choice of the company's path. "We decided that it's time to move from neutral to a proactive choice for good to sustain and nuture people, economies and societies," Lau said. "Tencent founder, Pony Ma, declared during a meeting that 'Tech for Good' is now an integral part of Tencent’s new mission and vision and definitely not going to be just a slogan."

Indeed, on stage Lau explained how the company sought to actually first define "good" first so that it had a firm foundation, and it is one of the first tech company’s I’ve heard even ponder so in public as opposed to assuming that it universally knows and can apply "good" for all.

"We know enough to know that we can’t truly define such a term, but essentially, we like to think of it as a world where all people bear social responsibilities and fulfill their respective duties working together for the sustainable development of the whole planet," said Lau.  "The ideal ‘perfect good’ is that which is a ‘sustainable community with a shared future’.” 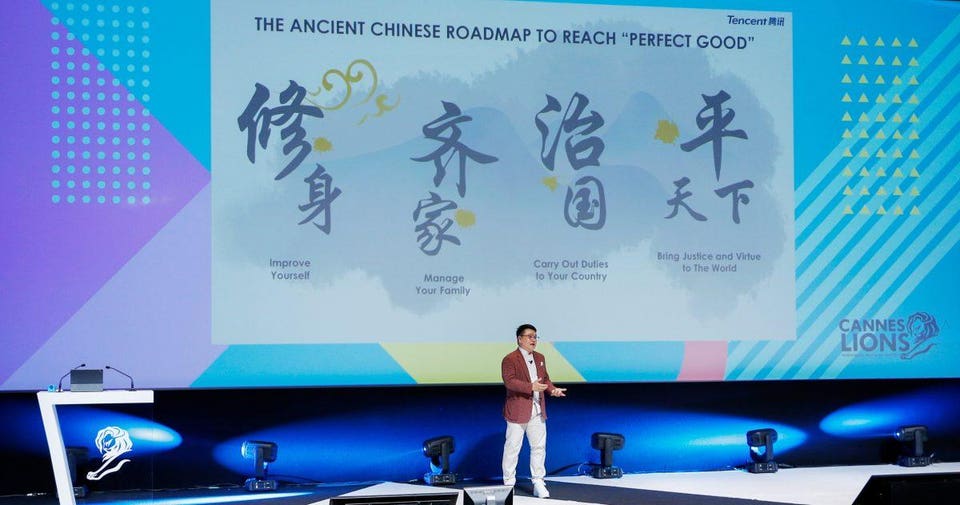 So Tencent is applying an ancient Chinese philosophical approach to good/a life well-lived to its roadmap by focusing the company's support of a 'sustainable community' looking at it from the level individual, community, country and, ultimately, the world.

Lau then went on to during his talk to offer a maze of Tencent's early applied strategy and practice in AI from being this tech being used to support various stages of healthcare exams via Tencent Medical Lab to speed up a currently mind-boggling lag time to see a physician in China to support of sustainable development of food via the Tencent AI Lab which, along with agricultural experts, has already produced an award for its “AI cucumbers” for a more efficient era of agricultural innovation.

This is about using AI so people can eat better, feel better, do better. And it's only just kicking off.

This new mission comes at a unique moment in Tencent's evolution. “We're now 20 years old," Lau told me. "We started a review-of-sorts of the company that started about six months ago, and this is part of what came out of it.” He continued,  “This is not just about corporate social responsibility but responsibility, overall. This is not about just a campaign."

Yet AI has proven that it is no easy nut to crack, and many of us have no idea how it will all really unfold and what this technology is truly capable of in the future.  Given this, companies like Tencent, no matter how lofty its intentions will more than likely be challenged over and over again not only in its approach by foreign mindsets when it comes to its greater global aspirations and definitions of tech for good but also to stay true to its vision while meetings its bottom line revenue goals. When asked about how to balance the latter hurdle, Lau says, "The two actually don't have to be mutually exclusive as we see from the writings of Adam Smith. That's the beauty of it." Time will tell.

As we barrel further ahead into the unknown world of AI, one thing is certain. Most all companies will need to create firm strategies and methods around the space of AI whether self-imposed or that from policymakers. "The problem with AI is that it shows the gray area of where there is right and wrong, good and evil, " explains Lau. "We at Tencent want to make sure we are on the right side of the equation."

Stay Up to Date With News, Inspirations and Events